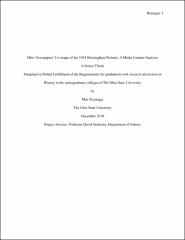 The importance of the civil rights movement of the 1960s in American history is unquestioned. Tremendous research has been done on the movement itself, but little research has focused on how the civil rights movement was covered and reported to Americans outside of the South. My project analyzes how six Ohio newspapers (Cincinnati Enquirer, Cleveland Plain Dealer, Columbus Evening Dispatch, Akron Beacon Journal, Toledo Blade, Cleveland Call and Post) and the Chicago Tribune covered the Birmingham protests and their immediate aftermath. My methods involve examining these seven newspapers from May 2, 1963 through June 18, 1963 and recording any coverage of these events, including the location, size, and political slant of a given article or editorial. My research indicates some newspapers like the Cleveland Plain Dealer provided extensive, and positive, coverage. Others, however, like the Cincinnati Enquirer, provided more limited and skeptical coverage. Results suggest more geographically northern newspapers provided better coverage, in terms of quality and quantity of articles and editorials, than the more southern newspapers. Newspaper ownership also affected the news and opinion coverage provided by newspapers. Moreover, my results indicate that coverage varied substantially amongst these seven newspapers. My project could also expand in the future to include more American and even international newspapers.