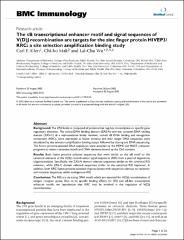 Background: The ZAS family is composed of proteins that regulate transcription via specific gene regulatory elements. The amino-DNA binding domain (ZAS-N) and the carboxyl-DNA binding domain (ZAS-C) of a representative family member, named κB DNA binding and recognition component (KRC), were expressed as fusion proteins and their target DNA sequences were elucidated by site selection amplification binding assays, followed by cloning and DNA sequencing. The fusion proteins-selected DNA sequences were analyzed by the MEME and MAST computer programs to obtain consensus motifs and DNA elements bound by the ZAS domains. Results: Both fusion proteins selected sequences that were similar to the κB motif or the canonical elements of the V(D)J recombination signal sequences (RSS) from a pool of degenerate oligonucleotides. Specifically, the ZAS-N domain selected sequences similar to the canonical RSS nonamer, while ZAS-C domain selected sequences similar to the canonical RSS heptamer. In addition, both KRC fusion proteins selected oligonucleoties with sequences identical to heptamer and nonamer sequences within endogenous RSS. Conclusions: The RSS are cis-acting DNA motifs which are essential for V(D)J recombination of antigen receptor genes. Due to its specific binding affinity for RSS and κB-like transcription enhancer motifs, we hypothesize that KRC may be involved in the regulation of V(D)J recombination.