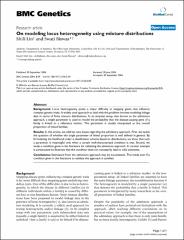 Background: Locus heterogeneity poses a major difficulty in mapping genes that influence complex genetic traits. A widely used approach to deal with this problem involves modeling linkage data in terms of finite mixture distributions. In its simplest setup, also known as the admixture approach, a single parameter is used to model the probability that the disease-causing gene of a family is linked to a reference marker. This parameter is usually interpreted as the overall proportion of linked families. Results: In this article, we address two issues regarding the admixture approach. First, we tackle the question of whether the single parameter of linked proportion is well defined in general. By formulating the likelihood under a classification scheme based on distributions, we show that such a parameter is meaningful only when a certain well-characterized condition is met. Second, we study a condition given in the literature for validating the admixture approach. A counter example is constructed to illustrate that the condition does not necessarily lead to valid estimates. Conclusions: Estimators from the admixture approach may be inconsistent. This holds even if a condition given in the literature to validate the approach is satisfied.