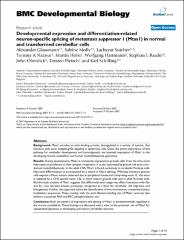 Background: Mtss1 encodes an actin-binding protein, dysregulated in a variety of tumors, that interacts with sonic hedgehog/Gli signaling in epidermal cells. Given the prime importance of this pathway for cerebellar development and tumorigenesis, we assessed expression of Mtss1 in the developing murine cerebellum and human medulloblastoma specimens. Results: During development, Mtss1 is transiently expressed in granule cells, from the time point they cease to proliferate to their synaptic integration. It is also expressed by granule cell precursor-derived medulloblastomas. In the adult CNS, Mtss1 is found exclusively in cerebellar Purkinje cells. Neuronal differentiation is accompanied by a switch in Mtss1 splicing. Whereas immature granule cells express a Mtss1 variant observed also in peripheral tissues and comprising exon 12, this exon is replaced by a CNS-specific exon, 12a, in more mature granule cells and in adult Purkinje cells. Bioinformatic analysis of Mtss1 suggests that differential exon usage may affect interaction with Fyn and Src, two tyrosine kinases previously recognized as critical for cerebellar cell migration and histogenesis. Further, this approach led to the identification of two evolutionary conserved nuclear localization sequences. These overlap with the actin filament binding site of Mtss1, and one also harbors a potential PKA and PKC phosphorylation site. Conclusion: Both the pattern of expression and splicing of Mtss1 is developmentally regulated in the murine cerebellum. These findings are discussed with a view on the potential role of Mtss1 for cytoskeletal dynamics in developing and mature cerebellar neurons.