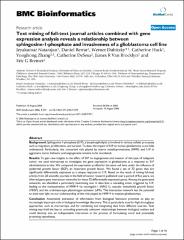 Background: Sphingosine 1-phosphate (S1P), a lysophospholipid, is involved in various cellular processes such as migration, proliferation, and survival. To date, the impact of S1P on human glioblastoma is not fully understood. Particularly, the concerted role played by matrix metalloproteinases (MMP) and S1P in aggressive tumor behavior and angiogenesis remains to be elucidated. Results: To gain new insights in the effect of S1P on angiogenesis and invasion of this type of malignant tumor, we used microarrays to investigate the gene expression in glioblastoma as a response to S1P administration in vitro. We compared the expression profiles for the same cell lines under the influence of epidermal growth factor (EGF), an important growth factor. We found a set of 72 genes that are significantly differentially expressed as a unique response to S1P. Based on the result of mining full-text articles from 20 scientific journals in the field of cancer research published over a period of five years, we inferred gene-gene interaction networks for these 72 differentially expressed genes. Among the generated networks, we identified a particularly interesting one. It describes a cascading event, triggered by S1P, leading to the transactivation of MMP-9 via neuregulin-1 (NRG-1), vascular endothelial growth factor (VEGF), and the urokinase-type plasminogen activator (uPA). This interaction network has the potential to shed new light on our understanding of the role played by MMP-9 in invasive glioblastomas. Conclusion: Automated extraction of information from biological literature promises to play an increasingly important role in biological knowledge discovery. This is particularly true for high-throughput approaches, such as microarrays, and for combining and integrating data from different sources. Text mining may hold the key to unraveling previously unknown relationships between biological entities and could develop into an indispensable instrument in the process of formulating novel and potentially promising hypotheses.