Absence of gemin5 from SMN complexes in nuclear Cajal bodies 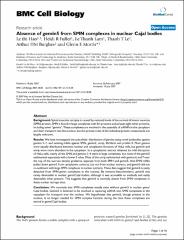 Background: Spinal muscular atrophy is caused by reduced levels of the survival of motor neurons (SMN) protein. SMN is found in large complexes with Sm proteins and at least eight other proteins, including seven "gemins". These complexes are involved in the assembly of snRNPs in the cytoplasm and their transport into the nucleus, but the precise roles of the individual protein components are largely unknown. Results: We have investigated the subcellular distribution of gemins using novel antibodies against gemins 3-7, and existing mAbs against SMN, gemin2, unrip, fibrillarin and profilin II. Most gemins were equally distributed between nuclear and cytoplasmic fractions of HeLa cells, but gemin5 and unrip were more abundant in the cytoplasm. In a cytoplasmic extract obtained by mild disruption of HeLa cells, nearly all the SMN and gemins 2-4 were in large complexes, but most of the gemin5 sedimented separately with a lower S value. Most of the unrip sedimented with gemins 6 and 7 near the top of the sucrose density gradients, separate from both SMN and gemin5. Anti-SMN mAbs pulled down gemin5 from cytoplasmic extracts, but not from nuclear extracts, and gemin5 did not co-sediment with large SMN complexes in nuclear extracts. These data suggest that gemin5 is easily detached from SMN-gemin complexes in the nucleus. By immuno-histochemistry, gemin5 was rarely detectable in nuclear gems/Cajal bodies, although it was accessible to antibody and easily detectable when present. This suggests that gemin5 is normally absent from SMN complexes in these nuclear storage sites. Conclusion: We conclude that SMN complexes usually exist without gemin5 in nuclear gems/ Cajal bodies. Gemin5 is believed to be involved in capturing snRNA into SMN complexes in the cytoplasm for transport into the nucleus. We hypothesize that gemin5, though present in the nucleus, is no longer needed for SMN complex function during the time these complexes are stored in gems/Cajal bodies.