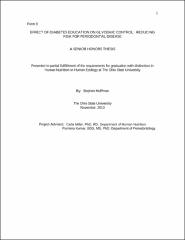 ABSTRACT: People with type 2 diabetes have an increased risk for periodontal disease, and achieving optimal glycemic control reduces the risk for this co-morbidity . The purpose of this study was to determine whether a new diabetes intervention focused on mindfulness could achieve greater improvements in glycemic control for people with diabetes compared to a standard diabetes intervention. To determine which intervention achieved greater improvement in glycemic control and thus greater risk reduction for periodontal disease, change in glycosylated hemoglobin, HbA1C was measured at baseline and following the intervention at 10 weeks. Men and women aged 35-65 years, diagnosed with type 2 diabetes for at least 1 year, who did not require insulin treatment, with a Body Mass Index ≥ 27.0 and HbA1c levels ≥ 7.0% participated in the study. Participants were randomized to either the MB-EAT group, which focused on cultivating “inner wisdom” and “outer wisdom” through mindfulness meditation along with nutrition education, or the Smart Choices group which was a standard diabetes nutrition intervention. Participants met in group sessions for 10 weeks. At baseline, both MB-EAT and Smart Choices groups were similar in weight, waist circumference, BMI, HbA1C, and fasting glucose values (all P > 0.05). There was no significant difference in the change in HbA1C between the two treatment groups. The Smart Choices group had a significant within-group change in HbA1C following the 10 week intervention, with a decrease of -0.71 ± 0.30 % (P = 0.02). The MB-Eat group had a near identical within-group change over the 10 weeks with a mean decrease in HbA1C of -0.67 ± 0.28 % (P = 0.02). After the 10 week intervention, the Smart Choices group had significant losses within-group in weight, waist circumference, and BMI for both men and women. The MB-EAT group did not have significant changes in weight, waist circumference, or BMI. There was no significant change for either group in fasting plasma glucose. Therefore, both treatments are effective in improving glycemic control and could reduce the risk of periodontal disease. Future research is needed to determine the impact of the interventions on the occurrence and progression of periodontal disease.