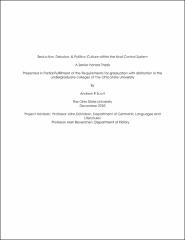 Title: Seduction, Delusion, & Politics: Culture within Nazi Control System Project Description: The primary objective of this project is to take a look inside the means and methods of the Nazi control system and its ability to play on man’s Verführbarkeit (seductability) and manipulate situational awareness in order to chastise and or make obedient whole populations. Its citizens would accept a new culture allowing them to depart from the moral standards they had once upheld. Guarded behind the shrouds of their secret police the Nazis were able to spread their doctrines and propaganda as well as fear, creating manifestations of otherwise purely innate feelings and perceptions of reality. Such actions can be brought about by the presence of authority figures, as is evidenced in the obedience studies conducted by Stanley Milgram. The subordinate to the authority figure feels compelled to do as they are ordered and is reassured that what they are doing is necessary. They have no reason to think for themselves, as this greater authority has convincingly endorsed their actions. Ultimately they have been manipulated by the encouragement of the authority figure who has affectively used his position to influence their behavior through their sanctification. Adolf Hitler himself summarized this phenomenon with the line, "How lucky are those who govern that the governed do not think for themselves." It is significant to note that the average SS prison guard was just that, average, with no hint of sociopathology. However, once placed in the situation, even though most knew (at first) their actions were immoral, their decision was eliminated by their superiors’ authorization of said actions. At the same time, such manifestations of feelings can just as easily be brought about by the absence of said authority as is the case in a multitude of situations ranging from the classroom to the battlefield. Soldiers guilty of war crimes are often let loose upon an enemy which they have successfully dehumanized. Without supervision the discharge of such swelled up emotion (anger, revenge, hatred) is almost guaranteed because there is nothing to hold it back. The fact that these offenders are often not alone creates an aura of anonymity which seemingly removes the blame from oneself making their actions seem justified. Another important influence of such behavior is fear itself. A classic example of which is portrayed in Bertolt Brecht’s work The Informer. The main characters are incredibly stricken by a fear that is ultimately nonexistent but is so generated by situational forces which have altered their perceptions of reality. Many Europeans became Nazi sympathizers out of utter fear that nonconformity would lead to imprisonment or death. Parallels are often drawn between George Orwell’s 1984, Nazi Germany, and Stalin’s Soviet Union, all societies whose citizens led lives with order and ambiguity fueled by the fear that any deviation from the norm would result in some form of interrogation or punishment. Other significant factors to be explored include the concepts of dehumanization, manipulation of language, nationalism, propaganda, and doubling.