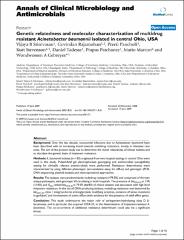 Background: Over the last decade, nosocomial infections due to Acinetobacter baumannii have been described with an increasing trend towards multidrug resistance, mostly in intensive care units. The aim of the present study was to determine the clonal relatedness of clinical isolates and to elucidate the genetic basis of imipenem resistance. Methods: A. baumannii isolates (n = 83) originated from two hospital settings in central Ohio were used in this study. Pulsed-field gel electrophoresis genotyping and antimicrobial susceptibility testing for clinically relevant antimicrobials were performed. Resistance determinants were characterized by using different phenotypic (accumulation assay for efflux) and genotypic (PCR, DNA sequencing, plasmid analysis and electroporation) approaches. Results: The isolates were predominantly multidrug resistant (>79.5%) and comprised of thirteen unique pulsotypes, with genotype VII circulating in both hospitals. The presence of blaOXA-23 in 13% (11/83) and ISAba1 linked blaOXA-66 in 79.5% (66/83) of clinical isolates was associated with high level imipenem resistance. In this set of OXA producing isolates, multidrug resistance was bestowed by blaADC-25, class 1 integron-borne aminoglycoside modifying enzymes, presence of sense mutations in gyrA/parC and involvement of active efflux (with evidence for the presence of adeB efflux gene). Conclusion: This study underscores the major role of carbapenem-hydrolyzing class D β-lactamases, and in particular the acquired OXA-23, in the dissemination of imipenem-resistant A. baumannii. The co-occurrence of additional resistance determinant could also be a significant threat.