Geographic distribution and genetic diversity of the Ehrlichia sp. from Panola Mountain in Amblyomma americanum 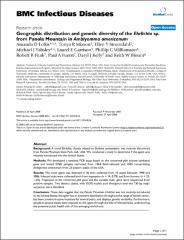 Background: A novel Ehrlichia, closely related to Ehrlichia ruminantium, was recently discovered from Panola Mountain State Park, GA, USA. We conducted a study to determine if this agent was recently introduced into the United States. Methods: We developed a sensitive PCR assay based on the conserved gltA (citrate synthase) gene and tested DNA samples extracted from 1964 field-collected and 1835 human-biting Amblyomma americanum from 23 eastern states of the USA. Results: The novel agent was detected in 36 ticks collected from 10 states between 1998 and 2006. Infected ticks were collected both from vegetation (n = 14, 0.7%) and from humans (n = 22, 1.2%). Fragments of the conserved gltA gene and the variable map1 gene were sequenced from positive samples. Two distinct clades, with 10.5% nucleic acid divergence over the 730 bp map1 sequence, were identified. Conclusion: These data suggest that the Panola Mountain Ehrlichia was not recently introduced to the United States; this agent has an extensive distribution throughout the range of its tick vector, has been present in some locations for several years, and displays genetic variability. Furthermore, people in several states were exposed to this agent through the bite of infected ticks, underscoring the potential public health risk of this emerging ehrlichiosis.