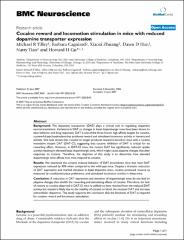 Background: The dopamine transporter (DAT) plays a critical role in regulating dopamine neurotransmission. Variations in DAT or changes in basal dopaminergic tone have been shown to alter behavior and drug responses. DAT is one of the three known high affinity targets for cocaine, a powerful psychostimulant that produces reward and stimulates locomotor activity in humans and animals. We have shown that cocaine no longer produces reward in knock-in mice with a cocaine insensitive mutant DAT (DAT-CI), suggesting that cocaine inhibition of DAT is critical for its rewarding effect. However, in DAT-CI mice, the mutant DAT has significantly reduced uptake activity resulting in elevated basal dopaminergic tone, which might cause adaptive changes that alter responses to cocaine. Therefore, the objective of this study is to determine how elevated dopaminergic tone affects how mice respond to cocaine. Results: We examined the cocaine induced behavior of DAT knockdown mice that have DAT expression reduced by 90% when compared to the wild type mice. Despite a dramatic reduction of DAT expression and marked elevation in basal dopamine tone, cocaine produced reward, as measured by conditioned place preference, and stimulated locomotor activity in these mice. Conclusion: A reduction in DAT expression and elevation of dopaminergic tone do not lead to adaptive changes that abolish the rewarding and stimulating effects of cocaine. Therefore, the lack of reward to cocaine observed in DAT-CI mice is unlikely to have resulted from the reduced DAT activity but instead is likely due to the inability of cocaine to block the mutated DAT and increase extracellular dopamine. This study supports the conclusion that the blockade of DAT is required for cocaine reward and locomotor stimulation.