Species and age related differences in the type and distribution of influenza virus receptors in different tissues of chickens, ducks and turkeys 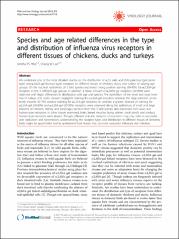 We undertook one of the most detailed studies on the distribution of α2,3 sialic acid (SA)-galactose (gal) (avian type) and α2,6SA-gal (human type) receptors on different tissues of chickens, ducks and turkeys of varying age groups. On the tracheal epithelium, all 3 bird species expressed strong positive staining (80-90%) for α2,3SA-gal receptors in the 3 different age groups. In addition, a lesser amount of α2,6SA-gal receptors (30-90%) were observed with slight differences in distribution with age and species. The epithelium of the small and large intestine of turkeys and ducks showed negligible staining for α2,6SA-gal receptors whereas the large intestine consistently showed 40-70% positive staining for α2,3SA-gal receptors. In contrast, a greater amount of staining for α2,3SA-gal (50-80%) and α2,6SA-gal (20-50%) receptors were observed along the epithelium of small and large intestine of chickens. Kidney and esophagus sections from the 3 bird species also expressed both avian and human type receptors. In other tissues examined, brain, breast muscles, bursa, spleen, cecal tonsils and oviduct, human type receptors were absent. Though different viral and receptor components may play roles in successful viral replication and transmission, understanding the receptor types and distribution in different tissues of domestic birds might be good initial tool to understand host factors that promote successful influenza viral infection.