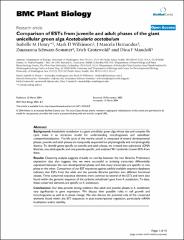 Background: Acetabularia acetabulum is a giant unicellular green alga whose size and complex life cycle make it an attractive model for understanding morphogenesis and subcellular compartmentalization. The life cycle of this marine unicell is composed of several developmental phases. Juvenile and adult phases are temporally sequential but physiologically and morphologically distinct. To identify genes specific to juvenile and adult phases, we created two subtracted cDNA libraries, one adult-specific and one juvenile-specific, and analyzed 941 randomly chosen ESTs from them. Results: Clustering analysis suggests virtually no overlap between the two libraries. Preliminary expression data also suggests that we were successful at isolating transcripts differentially expressed between the two developmental phases and that many transcripts are specific to one phase or the other. Comparison of our EST sequences against publicly available sequence databases indicates that ESTs from the adult and the juvenile libraries partition into different functional classes. Three conserved sequence elements were common to several of the ESTs and were also found within the genomic sequence of the carbonic anhydrase1 gene from A. acetabulum. To date, these conserved elements are specific to A. acetabulum. Conclusions: Our data provide strong evidence that adult and juvenile phases in A. acetabulum vary significantly in gene expression. We discuss their possible roles in cell growth and morphogenesis as well as in phase change. We also discuss the potential role of the conserved elements found within the EST sequences in post-transcriptional regulation, particularly mRNA localization and/or stability.