Results from the national sepsis practice survey: predictions about mortality and morbidity and recommendations for limitation of care orders 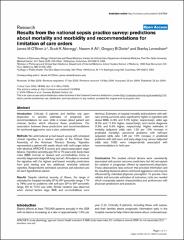 Introduction: Critically ill patients and families rely upon physicians to provide estimates of prognosis and recommendations for care. Little is known about patient and clinician factors which influence these predictions. The association between these predictions and recommendations for continued aggressive care is also understudied. Methods: We administered a mail-based survey with simulated clinical vignettes to a random sample of the Critical Care Assembly of the American Thoracic Society. Vignettes represented a patient with septic shock with multi-organ failure with identical APACHE II scores and sepsis-associated organ failures. Vignettes varied by age (50 or 70 years old), body mass index (BMI) (normal or obese) and co-morbidities (none or recently diagnosed stage IIA lung cancer). All subjects received the vignettes with the highest and lowest mortality predictions from pilot testing and two additional, randomly selected vignettes. Respondents estimated outcomes and selected care for each hypothetical patient. Results: Despite identical severity of illness, the range of estimates for hospital mortality (5th to 95th percentile range, 17% to 78%) and for problems with self-care (5th to 95th percentile range, 2% to 74%) was wide. Similar variation was observed when clinical factors (age, BMI, and co-morbidities) were identical. Estimates of hospital mortality and problems with self-care among survivors were significantly higher in vignettes with obese BMIs (4.3% and 5.3% higher, respectively), older age (8.2% and 11.6% higher, respectively), and cancer diagnosis (5.9% and 6.9% higher, respectively). Higher estimates of mortality (adjusted odds ratio 1.29 per 10% increase in predicted mortality), perceived problems with self-care (adjusted odds ratio 1.26 per 10% increase in predicted problems with self-care), and early-stage lung cancer (adjusted odds ratio 5.82) were independently associated with recommendations to limit care. Conclusions: The studied clinical factors were consistently associated with poorer outcome predictions but did not explain the variation in prognoses offered by experienced physicians. These observations raise concern that provided information and the resulting decisions about continued aggressive care may be influenced by individual physician perception. To provide more reliable and accurate estimates of outcomes, tools are needed which incorporate patient characteristics and preferences with physician predictions and practices.