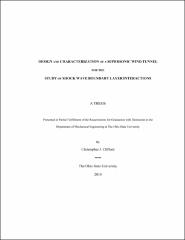 A new 3"x3" supersonic wind tunnel was built to facilitate the continued development of localized arc filament plasma actuators (LAFPAs) as a control method for supersonic mixed compression inlets. A variable angle wedge was employed as the compression surface to generate a variable strength shock wave boundary layer interaction (SWBLI). The resulting flow is Mach 2.33 with a Reynolds number based on boundary layer momentum thickness of 23,000. Several qualitative techniques were used to observe certain aspects of the flow and interaction. Schlieren imaging was used during the troubleshooting phase to identify extraneous shock waves and expansion waves and revealed an unwanted separation region on the ceiling. Oil flow visualization on the interaction surface highlights the three-dimensionality of the separation region, but also confirms a two-dimensional assumption near the centerline of the tunnel. The separation region was found to extend 20 mm in the streamwise direction. Particle image velocimetry (PIV) was used to gather quantitative flow field information about the freestream and boundary layer. The incoming boundary layer, measuring 4.62 mm in thickness, will be analyzed in further detail.