The Paris Commune of 1871 and the Bibliothèque Nationale 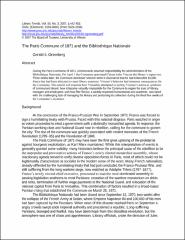 During the Paris Commune of 1871, communards assumed responsibility for administration of the Bibliothèque Nationale. On April 1 the Commune appointed Citizen Jules Vincent the library’s supervisor. Three weeks later, the Commune dismissed Vincent when it discovered that he had embezzled 10,000 francs that had been allocated to meet library expenses. Vincent’s behavior had immense consequences for the Commune. This article will examine how Versailles attempted to portray Vincent’s action as symbolic of communard deceit; how it became virtually impossible for the Commune to regain the trust of library managers and employees; and how Elie Reclus, a widely respected humanitarian and academic, was faced with the challenging task of managing the library and protecting its collection during the final five weeks of the Commune’s existence.