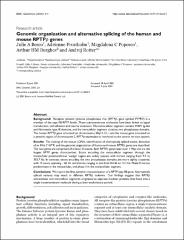 Background: Receptor protein tyrosine phosphatase rho (RPTPρ, gene symbol PTPRT) is a member of the type IIB RPTP family. These transmembrane molecules have been linked to signal transduction, cell adhesion and neurite extension. The extracellular segment contains MAM, Ig-like and fibronectin type III domains, and the intracellular segment contains two phosphatase domains. The human RPTPρ gene is located on chromosome 20q12-13.1, and the mouse gene is located on a syntenic region of chromosome 2. RPTPρ expression is restricted to the central nervous system. Results: The cloning of the mouse cDNA, identification of alternatively spliced exons, detection of an 8 kb 3'-UTR, and the genomic organization of human and mouse RPTPρ genes are described. The two genes are comprised of at least 33 exons. Both RPTPρ genes span over 1 Mbp and are the largest RPTP genes characterized. Exons encoding the extracellular segment through the intracellular juxtamembrane 'wedge' region are widely spaced, with introns ranging from 9.7 to 303.7 kb. In contrast, exons encoding the two phosphatase domains are more tightly clustered, with 15 exons spanning ∼60 kb, and introns ranging in size from 0.6 kb to 13.1 kb. Phase 0 introns predominate in the intracellular, and phase 1 in the extracellular segment. Conclusions: We report the first genomic characterization of a RPTP type IIB gene. Alternatively spliced variants may result in different RPTPρ isoforms. Our findings suggest that RPTPρ extracellular and intracellular segments originated as separate modular proteins that fused into a single transmembrane molecule during a later evolutionary period.