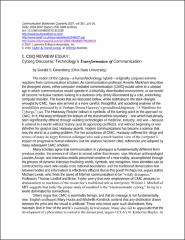 The notion of the cyborg—a human/technology hybrid—originally conjured extreme reactions from communication scholars. As communication professor Annette Markham describes the divergent views, either computer-mediated communication (CMC) would usher in a utopian age in which communicators would operate in a blissfully disembodied environment, or we would all become reclusive hackers lurking in a darkness only dimly illuminated by a cold, unblinking, computer monitor. The books that are discussed below, while testifying to the stark changes wrought by CMC, have also arrived at a more careful, thoughtful, and accepting analyses of the possibilities presented by it. Perhaps Donna Haraway's groundbreaking essay, "A Manifesto for Cyborgs," (see The Haraway Reader below) is symbolic of the turning point in the approach to CMC. In it, Haraway embraces the erasure of the man/machine boundary—one which had already been significantly effaced through existing technologies of medicine, industry, and war—because it ushered in a world without history (and its agonizing conflicts), and without beginning or end. Whether for good or bad, Haraway asserts, modern communications has become a science that sees the world as a coding problem. For her acceptance of CMC, Haraway suffered the slings and arrows of many an angry feminist colleague who took a much harsher view of the computer's impact on progressive human relations, but her analysis has been cited, referenced and adopted by many subsequent CMC scholars.