Interview of Herbert B. Asher by Marvin R. Zahniser 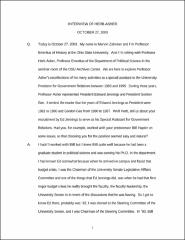