Interview of Charles Henry Summerson by Regina A. Brown 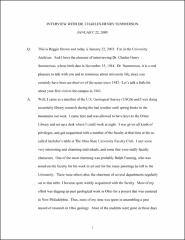 Dr. Summerson summarizes his experiences with the U.S. Geological survey that included Ohio geology. First as a “visitor” and then as a member, he found the bachelor’s table at OSU Faculty Club was a place “to meet very interesting and charming individuals” and some “faculty characters”. His interview includes his memories of various persons; e.g. President Novice Fawcett, Ralph Fanning, Woody Hayes, and many others. He described the role of Frank Ludden as advisor for the restoration of the paintings in Orton Hall. Dr. Summerson helped in the establishment of the summer field camp in Utah. He, George Harding, and Al Hynic designed the curriculum that led to the establishment of the Dept. of Geodetic Science. A strong interest in the history of science was supported by some other faculty members. They developed a History of Science course. When the emphasis in the Dept. of Mineralogy became less toward ceramics and more toward geology, it became a part of the Dept. of Geology. Dr. Summerson helped Richard Goldthwait write the prospectus for the Institute of Polar Studies. Dr. Summerson was asked to summarize some of the changes that occurred since he joined the faculty in 1947. The library became more formal in organization. The changes in buildings and traffic around the oval changed one’s pattern of daily activities. The descriptions of chairmen of the Dept. of Geology also include his experiences after the “snow bowl” in 1950. Dr. Summerson’s professional interests included sedimentology and the sources of marble for ancient Greek statues. After retirement, he had a major role in the renovation of Orton Hall and Mendenhall Lab.