A Comparative Study of Herder-Farmer Conflicts in West Africa 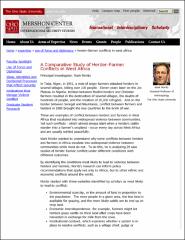 In Toda, Niger, in 1991, a mob of angry farmers attacked herders in several villages, killing over 100 people. Eleven years later on the Jos Plateau in Nigeria, tension between Muslim herders and Christian farmers resulted in the destruction of several villages, the deaths of hundreds of people, and the creation of 20,000 refugees. And on the border between Senegal and Mauritania, conflict between farmers and herders in 1989 brought the two countries to the brink of war. Mark Moritz wanted to understand why some conflicts between herders and farmers in Africa escalate into widespread violence between communities while most do not. To do this, he is analyzing 29 case studies of herder-farmer conflict under different conditions with different outcomes.