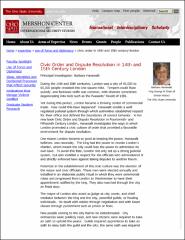 During the 14th and 15th centuries, London was a city of 40,000 to 60,000 people crowded into one square mile. Tempers could flare quickly, and factional strife was common, with disorder sometimes degenerating into riots such as the Peasants’ Revolt of 1381. Yet during this period, London became a thriving center of commercial trade. How could this have happened? Hanawalt credits a well regulated judicial system through which authorities established respect for their office and defined the boundaries of correct behavior. In her new book Civic Order and Dispute Resolution in Fourteenth- and Fifteenth Century London, Hanawalt investigates the ways in which London promoted a civic culture of order that provided a favorable environment for dispute resolution.