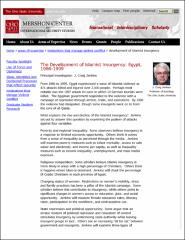 From 1986 to 1999, Egypt experienced a wave of Islamist violence as 474 attacks killed and injured over 2,000 people. Perhaps most notable was the 1997 attack in Luxor in which 10 German tourists were killed. The Egyptian government responded to the violence with a campaign of repression through arrests, trials, and executions. By 1999 the violence had dissipated, though some insurgents went on to form the core of al-Qaida. What explains the rise and decline of the Islamist insurgency? Jenkins set out to answer this question by examining the pattern of attacks against four variables.