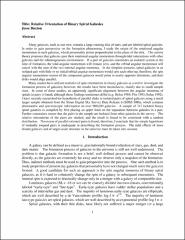 Many galaxies, such as our own, contain a large rotating disk of stars, and are labeled spiral galaxies. In order to gain perspective on the formation phenomena, I study the origin of the rotational angular momentum in such galaxies, which presumably points perpendicular to the plane of the disk. The current theory proposes that galaxies gain their rotational angular momentum through tidal interactions with other galaxies and the inhomogeneous environment. If a pair of galaxies constitutes an isolated system at the time of formation, the total angular momentum will remain zero, and the orbital angular momentum will cancel with the sum of the two internal angular momenta. In the simplest scenario, spiral galaxies in an isolated pair with little or no initial orbital angular momentum would spin each other up; therefore, the spin angular momentum vectors of the companion galaxies would point in nearly opposite directions, and their disks would align parallel. Many studies have utilized statistics of spin orientations in binary galaxies as a tool to investigate the formation process of galaxies; however, the results have been inconclusive, mainly due to small sample sizes. In some of these studies, an apparently significant alignment between the angular momenta of spirals in pairs is found, although these findings sometimes differ (e.g. Helou 1984; Flin 1993; Sofue 1992). I have recently researched the hypothesis of parallel disks in isolated pairs of spiral galaxies using a much larger sample obtained from the Sloan Digital Sky Survey Data Release 6 (SDSS DR6), which contains photometric and spectroscopic information on over 900,000 galaxies. A sample of 747 isolated binary spiral galaxies is compiled by first placing an upper limit on the separation between galaxies in a pair. Further constraints ensure that the pairs in the sample are isolated from other galaxies in the survey. The relative orientations of the pairs are studied, and the result is found to be consistent with a random distribution. No excess of parallel-oriented pairs is found; therefore, I conclude that the simple hypothesis of mutually torqued pairs is inadequate in describing the formation process. The tidal effects of more distant galaxies and of larger-scale structure in the universe must be taken into account.