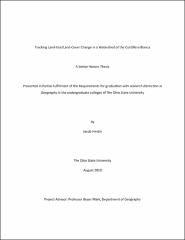 Climate change is a global phenomenon with differing regional impacts. One region that stands to be severely affected is the Cordillera Blanca mountain range in northwestern Peru, home to the world’s highest concentration of tropical glaciers. The glaciers in the range have lost 11-30 percent of their area over the last four decades, prompting concern for the region’s future hydrological resources. The flow of the region’s primary river, the Rio Santa, has been found to be declining over the last few decades; one hypothesis is that land-use/land-cover change (LULCC) in the river’s watershed has affected the river’s flow. This thesis examines LULCC in the Rio Santa Watershed region to help contribute social research to the physical research being done in the area. A simple supervised classification was performed on four Landsat satellite images from May/September 1986 and 2006, and the results were compared. The results indicated that wetlands and agricultural areas expanded while forested areas declined; however, methodological and data quality issues impaired the validity of the study’s findings. Future research in the area is needed to provide a holistic view of the region’s systems in order to assist planners and agencies in this dynamic landscape. Advisor: Bryan G. Mark