Environmental effects of underground salt mining and mine collapses with emphasis on the Retsof Salt Mine Livingston County, New York 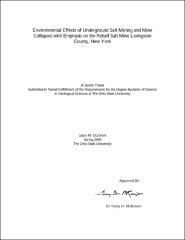 Mining and mineral resources have been an important part in the history of civilizations and the Retsof Salt Mine was once one of the largest operations in underground salt mining in the world. The mine produced millions of tons of rock salt throughout its one hundred and ten year lifetime up to its collapse and flooding in 1994. Factors that have contributed to the environmental changes in the region and to the collapse include ground water flow and degradation, land subsidence, damages to properties and land and transportation problems due to damage to the infrastructure. Certain precursors have been examined prior to the collapse, but nothing prominent enough to fix or prevent. In this paper I will examine causes and effects and environmental factores of underground salt mining with emphasis on the Retsof Salt Mine and its collapse effect on the town of York, New York.