Reconnaissance for secondary recovery, through reservoir characterization and analysis of the Lower Silurian Clinton Sandstone, the Appalachian basin 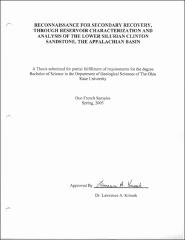 The lower Silurian Clinton sandstone has been a prolific producer of hydrocarbons since the end of the 19th century. Reservoir conditions are typically poor with low permeability and porosity; so low that in most cases the Clinton is classified as a tight gas formation. The gas-to-oil ratio of this producing formation is very high, with production records proving it to be overall a much more prolific producer of gas than oil. The majority of oil produced from this interval comes from the central part of Ohio, as the formation pinches out a small distance farther west. The majority of gas comes from the easternmost part of the state, deeper within the Appalachian Basin. In Ohio more than 70,000 Clinton wells have been drilled to date. The major pools have been discovered, primary production has dwindled with depletion of reservoir pressure. Numerous small-scale tectonic structures that have a significant influence on the hydrocarbon accumulation may have been missed, during development of this horizon. Locations where significant hydrocarbons have been produced and primary production has been exhausted provide feasible opportunities for secondary recovery methods. Understanding the complex geology and reservoir parameters of this petroleum system will be instrumental in the success of any secondary recovery attempts.