The Relation of Bias in Life Event Predictions and Depressive Symptoms: Considering the Role of Beliefs of Control 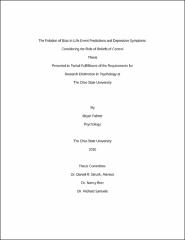