Battlecruisers at Jutland: A Comparative Analysis of British and German Warship Design and its Impact on the Naval War 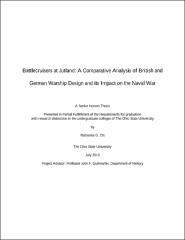 The Battle of Jutland occurred on 31 May - 1 June 1916, between the British Grand Fleet and the German High Seas Fleet. The battle began with an engagement between the battlecruiser squadrons of both sides' navies. During the initial engagement, two British battlecruisers were destroyed by ammunition explosions; a third followed during the main fleet action. This paper examines the causes for the comparatively poor performance of the British battlecruiser squadron and the apparent superiority of the German ships. Technical characteristics, training, and ammunition handling are discussed in detail.