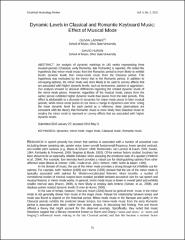 An analysis of dynamic markings in 140 works representing three musical periods (Classical, early Romantic, late Romantic) is reported. We tested the hypothesis that minor-mode music from the Romantic period is more likely to exhibit louder dynamic levels than minor-mode music from the Classical period. This hypothesis was motivated by the theory that in the Romantic period, in addition to conveying sadness, the minor mode was more likely to be used to convey affects that are associated with higher dynamic levels, such as seriousness, passion or aggression. Our analysis showed no absolute differences regarding the notated dynamic levels of the minor-mode pieces. However, regardless of the musical mode, pieces from the earlier period exhibited higher dynamic levels than pieces from the later periods. This effect is attributable to a decrease in dynamics for major-mode pieces in later musical periods, while minor-mode pieces do not show a change in dynamics over time. Using the mean dynamic level for each period as a reference, these observations are consistent with the theory that Romantic music is more likely than Classical music to employ the minor mode to represent or convey affects that are associated with higher dynamic levels.