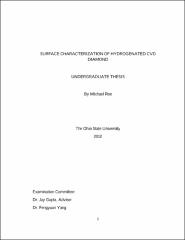 Although diamond is intrinsically a bulk insulator, ultra-high vacuum (UHV) hydrogen surface treatment and subsequent exposure to air make diamond a p-type semiconductor. After sputtering hydrogen atoms on the sample surface while heating the diamond, we measured no conductance in vacuum. Upon exposing the sample to air, we found the surface conductance increased by approximately 7 orders of magnitude. Current theoretical models suggest that when water vapor adsorbates from the atmosphere chemically react with the hydrogen, a system of charged surface acceptors forms. Since hydrogenation raises the surface conductivity above the tunneling barrier, atomic scale scanning tunneling microscopy (STM) is being performed to probe the surface topography. The purpose of this study is to examine the formation of the hydrogenated surface layer by atomic force microscopy (AFM) and Raman spectroscopy.