Description and Access in Rare Books Cataloging: A Historical Survey 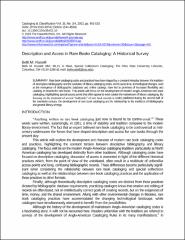 Rare book cataloging codes and practices have been shaped by a constant interplay between the tradition of descriptive bibliography and the evolution of library cataloging codes. At the same time, technological changes, such as the emergence of bibliographic databases and online catalogs, have led to promises of increased flexibility and usability in records for rare books. This article will focus on the development of modern Anglo-American rare book cataloging, highlighting special access points that often appear to exist outside the mainstream of library cataloging. By focusing on the treatment of several “hallmarks” of rare book records in codes published during the second half of the twentieth century, the development of rare book cataloging and its relationship to the traditions of bibliography and general library emerge.