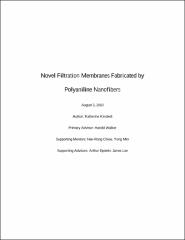 A key advance in the field of nanotechnology is the development of self-assembling polyaniline carbon nanofibers. Hydrophilic polyaniline nanostructures offer great promise for the field of filtration technology. The properties of these hydrophilic membranes could significantly reduce fouling of membranes by adsorption of natural organic matter (NOM) foulants. Three different types of the membranes were fabricated based on polyaniline (PANI) nanostructures. The first one is the composite type of membrane consisting of a support with a large pore size, dispersed carbon nanofibers (CNFs), and a final polyaniline nanostructured coating. The second form is the thermal crosslinked free-standing porous films of polyaniline nanofibers, and the final form is the in-situ deposited polyaniline nanostructures grown on the commercially available microfiltration membranes such as cellulose acetate and polyethersulfone membranes. All three membrane types were created and the results from the optimization and comparison of these three types of membranes are discussed. The best membrane candidates in their class were evaluated qualitatively for mechanical durability and uniformity and/or physically for water filtration performance properties such as pure water flux and fouling potential. The most successful membranes were compared with commercially available polysulfone, cellulose acetate and cellulose ester membranes. It was found that the thin film membranes had problems with physical integrity and the composite membranes had the most issues with consistency between batches. Thus, the majority of experimental variables such as the impact of the PANI dopants, doped state, and pH of the foulant solution were investigated using the PANI nanofiber coated membranes. It was found that PANI coatings did not improve the fouling performance over the reference under any of these conditions and that the PANI nanofiber coating increased the hydrophobicity of commercially available membranes.