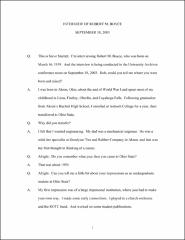 As an undergraduate student at Ohio State in the late 1930’s Robert Boyce abandoned an earlier interest in engineering and enrolled in the School of Journalism. His studies were interrupted suddenly by Pearl Harbor. He spent four years in the Army Signal Corps, and returned to Ohio State in January 1946, this time as a geology major. Boyce discovered, however, that the advanced mathematics courses required for geology were difficult, and his graduation could be delayed. Recalling at the time his earlier interest in journalism he changed his major again, this time to English. He graduated with a major in English in 1950 and was married that same year. He worked for ten years with United Press. There he wrote a number of features and also special stories, but his job there seemed to be a dead-end. He accepted an offer in 1960 from Bill Rounds, head of the News Services, to join the Office of Communications at Ohio State. Boyce was a writer in that office and worked with several different departments, including the College of Engineering, Arts and Sciences, the Institute of Polar Studies, and the Center for Lake Erie Area Research. The main goal of the News Services was to get news about the university to the local media, and further on if they could. As the university grew new components were added to the News Services, including a radio and TV reporter. In time the office had its own photo operation. An area of ongoing and special concern for the public relations office was the realization that many faculty members were very self-conscious about the fact that the national image of Ohio State appeared to be one “of jocks and football and with not much emphasis on academics.” Although there was a special sports office that handled publicity for football and basketball, the Office of News Services, as a counterweight, worked hard to emphasize academics. This was a concern reflected on down from the President’s office to Fred Stecker, the Executive Director of University Relations. Another aspect of Boyce’s office was the creation of a faculty newsletter in the early 1960’s. The Cuban Missile Crisis of 1962 was a unique challenge to the Office of News Services. The Office was central to informing the entire university community about necessary precautions to take in the event of an attack by the Soviets. Supplies were stockpiled, and some residents constructed underground shelters. There were bomb shelters in the Administration Building and most other buildings on campus as well. Another stressful time was the demonstrations on college campuses, including Ohio State, against the War in Vietnam in the later 1960’s. Such anti-war demonstrations soon spilled over into civil rights issues including student’s rights, women’s rights, and black recognition. There were numerous sit-ins and demonstrations that caused confrontations between faculty and students. At one point “an unruly mob” threatened to storm the Administration Building, and Governor Rhodes sent the Ohio National Guard to campus. Boyce himself roamed the Oval with a wire recorder to get a better understanding of the goals of the demonstrators. A Blue Ribbon Committee of Ohio State Faculty Members was organized to try to soothe the contentions between factions. Woody Hayes was a member of that committee. Starting in the 1970’s Boyce recalls both students and faculty embraced more casual dress, and furthermore that relations between students and faculty became less formal. Ties were out, jeans were in. Hopefully that contributed to an improved learning atmosphere for students. At the same time there was more student participation in the governance of the university. In time a student was represented on the Board of Trustees. Improved technology drastically changed the Office of University Relations as typewriters and mimeograph machines gave way to computers and printers. In Boyce’s era E-mail was not available, and all news releases had to be hand delivered. Other changes that Boyce recalled during his more than sixty-year association with Ohio State as a student, alumni, and employee were the great increases in the numbers of women among the student body, faculty, and administration. The same was true to a lesser extent for African-Americans. Looking back over his long association with Ohio State Boyce recalled some of the exceptional people whom he had known. Charles Herdendorf was responsible for bringing CLEAR (Center for Lake Erie Area Research) into formation at Ohio State. He founded the Stone Laboratory on Gibraltar Island, a five-acre tiny island offshore from South Bass Island. John Melvin was the Executive Director of the Ohio Academy of Science. He proved to be an excellent source for science stories. Boyce’s best source for information on Antarctica and other polar areas was Richard Goldthwait, professor of geology, and the first Director of the Institute of Polar Studies.