Interview of Glenn A. Fry by Gregory Wallace Good 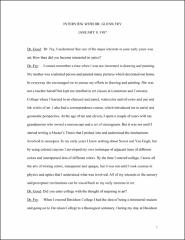 Dr. Glenn Fry was a Professor and Director of the School of Optometry. He had a long and distinguished career at Ohio State in research, teaching, and administration. As a youth he had a strong interest in art, and this spurred his later interests in sensory and perceptual mechanisms. At Davidson College his success in the study of psychology led to a graduate scholarship at Duke University. Here he studied under the direction of William MacDougal who got him interested in Mach Bands and binocular rivalry of colors and responses to flashes and intermittent stimuli. A post-graduate Fellowship from the National Research Council at Washington University led to a fruitful association with Percy Cobb and George Bishop who introduced Fry to electro-physiology. Soon after coming to Ohio State he added aniseikonia to his growing field of interests. Dr. Alpheus Smith, chairman of the Physics Department at Ohio State, recruited Fry to run the program in Applied Optics. At the time the optometry program was referred to as applied optics, and was managed through the Department of Physics and the College of Engineering. In time the management of the program was switched from Engineering to the College of Arts and Sciences, and it became known as the School of Optometry. Among the professors who made major contributions to the field of optometry at Ohio State were Alpheus Smith, Howard Haines, Ellsworth Reese, Herbert Mote, Charles Bridgeman, and Fred Paul. Major emphasis early on was placed on the graduate program in physiological optics, and ultimately this led to the development of the Institute for Research and Vision at Ohio State. As Director of the School of Optometry Fry continued his strong research interest, and he was involved in the study of skiametry, visual acuity, and problems related to accommodation and convergence. As an administrator he took special pride in the introduction of the graduate program in physiological optics; many of its graduates have become significant researchers and several have become Deans at other colleges. The growth of the Institute for Research in Vision led to a joint effort between optometry and ophthalmology, and over time to further cooperative relations with such diverse departments as psychology, physics, education, engineering, and fine arts. A core belief of Dr. Fry is that optometry must play a university-wide role in fostering research in visual science. It is, after all, an application of visual science, which deals with the clinical aspects of human vision, and this relationship is important for diverse fields of study as listed above. In more recent times there has been developed a six-year program in ophthalmology, and the offering of a Doctor of Optometry Degree (O.D.). Since his day at Ohio State the School of Optometry has become the College of Optometry. Among the key individuals who through the years aided the growth of optometry at Ohio State were Alpheus Smith, Dean Osborn Fuller of the Colleges of Arts and Sciences, Vice President Fred Heimberger, President Novice Fawcett, and Dr. Harold Oyster, an optometrist. As a researcher Fry believes that his major national reputation came from his work on discomfort glare. He also served on committees for several national organizations, had numerous publications, and won several distinguished awards.