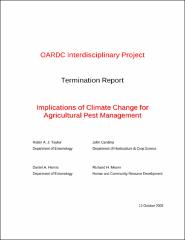 The thermal requirements of crops and insect pests differ significantly; their differential thermal requirements will govern how climate change impacts pest management needs and practices. To investigate the impact of climate change on pest management and the implications for farming communities, we have connected EPIC, a field-scale crop management model, with a temperature-driven model of insect population development (GILSM). EPIC was used to model the corn and soybean rotation common in the Midwest, and GILSM was programmed to model the growth of nine insect pests of corn and/or soybeans. Output from the model system was input to a geographic information system covering the eight-state corn-belt (Indiana, Illinois, Iowa, Kansas, Kentucky, Missouri, Nebraska and Ohio). The models were driven using GFDL-CM2 climate scenario data developed for the period 1901-2100 as part of NOA and IPCC investigations of global climate change. Over the past 100 years, crop productivity has increased several fold as a result of improved cultivation methods, fertilizers and pesticides, and plant breeding. In order to remove the confounding of changes in technology and possible climate change over the past century and unknown changes to come in the next century, a standard crop production protocol was used from 1901-2100. Using the crop production practices used most commonly in 2000 (the midpoint of the period), EPIC/GILSM was run for four 50 year periods (1901-1950, 1951-2000, 2001-2050 and 2051-2100) and the changes in crop yield and insect abundance were examined between periods. Nine insect pests found throughout the region were modeled to examine the range of likely responses of insect pests to climate change and the possible change in crop protection needs over the next 100 years. As expected, the model predicted little or no change between the first and second periods. For most species, change was maximum in the third period and less during the fourth period. In every case the isoclines for pest population density and crop productivity moved northwards, but at different rates, resulting in the isoclines for crop damage increasing as they moved northward. In two cases the pest abundance declined locally even as productivity increased, resulting in a net increase in productivity. No allowance was made for changes in agronomic practices or improvements in breeding pest resistance, both of which have helped to improve productivity over the past century.

Termination Report
The University Archives has determined that this item is of continuing value to OSU's history.