Is it Really NIMBYism? The Socio-Politics of Landfills in Appalachian Ohio, USA 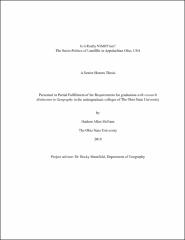 This research puts forth a critique of the NIMBY (not in my backyard) discourse, according to which local opposition to controversial land-uses is best explained as misinformed and driven by self-interest. By obscuring the roots of local struggle and radically oversimplifying its logic, this discourse disproportionately serves supra-local political interests. In particular, its conventional portrayal as a rational critique of irrational local behavior disregards a distinctly scalar politics involving contradictory knowledges and uneven relations of power. In Appalachian Ohio, the NIMBY discourse threatens to discount a complex socio-political history, which is fundamental to understanding local resistance to landfills. In this region, challenges to external control have been commonplace for over a century. For example, in the late nineteenth century coal miners organized numerous strikes to resist perceived exploitation by coal companies. While most mines have closed since the 1930s, in recent decades some abandoned mine sites have become profitable as landfills, especially as out-of-state waste imports have increased. Residents insist that they have unfairly become a dumping ground for other people’s waste, which they seem to connect to a longstanding cycle of perceived exploitation by outsiders. These sentiments reveal that just as landfills are themselves a legacy of mining, so is local opposition to landfills, which is a legacy of ongoing distrust of outsiders. I argue that this distrust helps explain residents’ contemporary interactions with external authorities, such as the EPA, and the concerns motivating their resistance. In so doing, I demonstrate that the NIMBY discourse produces an inadequate and misleading account of resistance to landfills in Appalachian Ohio and propose that we replace it with flexible interpretations of land-use conflicts that are adaptive to spatial heterogeneity and responsive to manifold interests – including those of oft-neglected localities.