The Austerity of Neo-Liberalism: Peasant [De]Mobilization and Special Economic Zones in South India 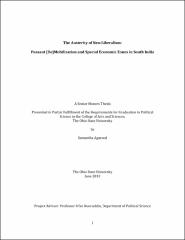 Neo-liberal reforms are often met with widespread discontent in agrarian societies. This project examines a specific manifestation of the post-1990 Indian neo-liberal regime, the Special Economic Zone (SEZ), and its impact on marginal farmers. The SEZ Act of 2005 encourages the establishment of single or multi-product export zones, each with a high minimum land requirement (12,500 acres for the latter). The geographically isolated area is comparable to the export enclave or the industrial park, where developers of the SEZ are aided by the government’s power of eminent domain (the Land Acquisition Act of 1894) in acquiring desirable land from tenants and landholders. Thus, what was once commons or small-to- medium-holder land then becomes a massive industrial township- its investors not beholden to local governance. Since neo-liberalism throughout the global South has been contested rigorously among the peasantry, it was my aim to investigate why the SEZ, an austere tentacle of economic liberalism, was not being successfully challenged with collective action or organized rebellion. I spent 30 days in Polepally village, Andhra Pradesh where 1,000 acres of land were acquired for the purpose of establishing a Pharmaceutical and Textiles SEZ. My field research revealed, counter-intuitively, that all but a dozen of the farmers initially favored the land acquisition. It was only months after they had signed their land to the government in 2001 that certain members of the peasantry, with outside leadership, organized a haphazard and largely unsuccessful civil disobedience campaign. I hypothesize the cause for delayed and fragmented mobilization is two-tiered. First, neo-populism in Andhra Pradesh has homogenized elite political strategy: politicians laud the pro-farmer platform while simultaneously supporting the neo-liberal regime. Second, a new village social hierarchy has articulated what Mao called a "middle peasant", who supports land acquisition and helps coerce landless tillers and small farmers to follow suit. The implications of such findings suggest that a village-level analysis might prove to be invaluable in assessing the success or failure of developmental reforms. It, further, questions the validity of the land acquisition process for the sake of development as executed under the Special Economic Zone Act (2005). My claims rely on rigorous surveys conducted with 65 villagers- 50 of whom lost their land in the SEZ and 15 who were unaffected, lengthy interviews with 10 local and state-level government officials, 10 interviews with key activists organizing against the SEZ and countless hours observing the daily relations and conversations of the Polepally people.