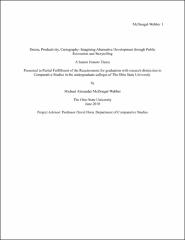 In early 2009, 11 public recreation centers in Columbus, Ohio closed for lack of funds. My project has been under way for as long, not only to find ways of defending public space, but also to explore the everyday lives produced in recreation centers. My operating assumptions are that we are missing effective modes of introducing the value of these facilities into political machines, and that that has more to do with the shift from reformist to neoliberal styles of urban governmentality than it has to do with any budget crisis. My work is presented as accompaniment to a series of original short stories and interviews inspired by extensive fieldwork, organizing efforts, conversations with public officials, and collaboration with a multiplicity of heterogeneous publics. I draw inspiration from Donna Haraway and Kathleen Stewart, both of whom embrace storytelling in their critical theoretical work to produce a "contact zone for analysis" (Stewart, 2008). My work, however, uses storytelling for imagining non-capitalist economies and especially non-capitalist development projects within communities fluctuating between hegemonic development or systemic disinvestment. My work in centers has expanded to neighborhood-level housing issues. Neoliberal development has a history of extracting unconscionable amounts of wealth from developing nations undergoing development. At the neighborhood scale, neoliberal development similarly uproots and recodes neighborhood historical and cultural artifacts for profit and consumption. Often folk forms are employed to code such projects as part of a "natural order." The dominance of this natural order so deftly divides our thinking that activists working in low-income communities are no longer surprised to hear residents whole-heartedly support the demolition of their homes and their own displacement in the interest of "improving" the neighborhood. Marginal economic actors either hope to outlast a development plan that is for some other public, or languish in an everyday that is steadily losing faith in public spaces and programs. It is in this midst that I make spaces for oral performance. It is through folk knowledge, community and imagination that non-colonial and non-imperial alternatives to hegemonic development begin to take shape.