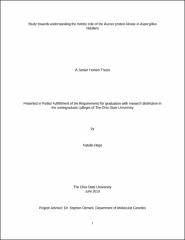 Mitosis is the process by which cells segregate their DNA equally during cell division and growth. Because uncontrolled mitosis can lead to cancer, mitotic regulators like the Aurora protein kinase in Aspergillus nidulans are very important. Kinases are enzymes which are capable of activating or inactivating proteins by phosphorylating them. It had already been demonstrated that another mitotic regulator, the NIMA protein kinase, was essential. To determine whether or not Aurora was required for mitosis and growth, I deleted the Aurora gene from the A. nidulans genome via homologous recombination of a deletion construct. Transformed strains survived only by forming heterokaryons which contained 2 genetically distinct nuclei. This is typical after deletion of genes that are essential for survival. In addition, I endogenously tagged the Aurora gene with Green Fluorescent Protein (GFP). This allows for visualization via confocal microscopy of temporal and spatial location of Aurora during the cell cycle. I found that Aurora-GFP had a mitotic specific location on mitotic spindles. The techniques used for these experiments include Polymerase Chain Reaction, western blots, gel electrophoresis, and growth tests on various types of media. Because the NIMA and Aurora kinases are both implicated in mitotic initiation, it is hypothesized that they work together to achieve this event. In addition to this, both NIMA and Aurora have homologous genes in the human genome, therefore my studies might shed light upon the origins and treatments of cancer in humans.