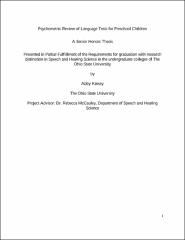 Speech-language pathologists have a large number of norm-referenced tests to choose from as they diagnose language disorders in preschool age children. Because determining the psychometric quality of a test is important to that choice, the purpose of the present study is to review the quality of currently available tests. A standardized search strategy yielded 15 norm-referenced tests published since 1998 that focused on language skills in preschool children. Eleven criteria related to the test manual's documentation of evidence such as reliability and validity were developed for use in the review based on those used in 2 similar studies (McCauley & Swisher, 1984; McCauley and Strand, 2008). Studies such as this can (a) promote ongoing study of existing tests to strengthen evidence of their psychometric quality and (b) encourage improvements in future test development. Further, such studies can increase speech-language pathologists' attention to the importance of psychometric characteristics and the potentially negative effects of poorer tests on the quality of their own work.