Affective Attribution and Performance on the Iowa Gambling Task 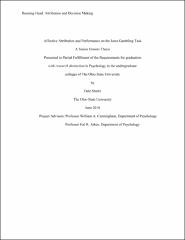 This study examined how attribution of emotion influences decision making on the Iowa Gambling Task (IGT). People are believed to rely on subtle unconscious changes in emotion to switch their preference from the bad decks to the good decks on the IGT. The current study looked at how attributing emotion to an external source instead of the internal cues that are thought to be used in this task, influences performance on the IGT. All Participants were given a placebo before they began the IGT and they were told that it helps with measuring skin conductance. The control group was not given any more information while the experimental group participants were told that the placebo caused an increase in heart rate and respiration. Participants in the experimental condition were expected to perform worse on the task than the controls because they were expected to believe the affect that arises from performing the task is due to the placebo and thus ignore internal cues to move away from bad decks. The results were in the opposite direction of the predicted results and those who were in the experimental group learned faster than the control group.