Molding Minds: The Roman Use of the Cuirassed Statue in Defining Empire 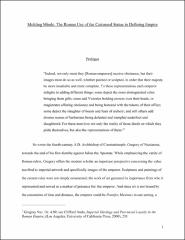 Though a Roman emperor possessed a wide variety of media on which he could address his subjects- coins, arches, decrees- one of the most presently understudied is that of the cuirassed statue. In this artistic genre, the emperor was portrayed in the guise of a triumphant general while performing an adlocutio or simply holding a spear or globe to signify imperial global hegemony. Though the gesture of the ruler is certainly important, in the present study I am examining the function of the face of the breastplate as it concerns imperial propaganda. On this stone canvass the artist carved messages that enabled an emperor to advertise his latest military victory while subtly directing the thoughts of his subjects in regards to how they viewed both their own unique place within the empire and the barbaric "others" outside of it. In particular, the image of the demoralized and defeated barbarian was an especially popular and potent device utilized by many emperors to commemorate a specific victory. Through the agency of the cuirass, for example, citizens in Gaul learned of the subjugation of Judea; a land that was far removed geographically and likely not a part of their conception of the world; that is, until the emperor brought both knowledge of his victory and images of this alien people to their collective psyches. Thus, the narrative on the cuirass shaped how the Gauls viewed the emperor, the empire, and the distant peoples who challenged Rome. By examining important works within the genre and with a keen eye towards historical contexts and modern theoretical approaches, I hope to come to a fuller understanding of the ways in which a ruler strived to construct the opinions and memories of his subjects.