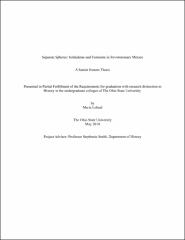 This paper primarily compares and contrasts the experiences of two groups of women that emerged in the national consciousness of Mexico during and after the 1910 Mexican Revolution: the feminists who had begun their work under the dictatorship of Porfirio Diaz, and the soldaderas who acted as camp followers to the revolutionary troops. The soldaderas were an indispensable feature of the military by acting as the unofficial quartermasters for the soldiers, yet they received only the hardships of traveling and sometimes fighting with the military as well as the intense criticism of their role by higher-ranking officers. The fact that they were almost always women of the lower classes intensified derision towards them, due to the atmosphere of class-consciousness that remained in Mexico even after the revolution. The feminists encouraged the revolution in order to forge a place for themselves in the new society, yet condescended to the lower-classes and did not ally with the women that had been soldaderas. Yet the feminists of the postrevolutionary period suffered divisions between them that, along with the intense social criticism they endured, acted as impediments to the progression of their movement up until the end of the 1920's. Because both groups contrasted so strongly, this paper's examination of both the variables that separated the soldaderas and the feminists, and the similarities that mark their experiences as transgressing sexual boundaries, provides a clearer picture of the wide range of female experiences and influences during and after the Mexican Revolution.