Making Sense in Afghanistan: Interaction and Uncertainty in International Interventions 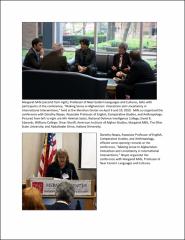 The counterinsurgency doctrine set forth in U.S. Army-Marine Field Manual 3-24 has prompted continual debate since its 2006 publication. The manual prescribes a focus on the civilian population rather than combatants, with stabilization and nation-building deemed central to the defeat of insurgencies. The manual has received extensive media coverage in the United States, influenced parallel efforts among allied militaries, and been elaborated and extended in the broader reshaping of U.S. military operations. Leaders both political and military disagree on the viability of the approach, whether it serves the national interest, and whether it strengthens or weakens the military as an institution. Scholars, while often sympathetic to the manual's goals, have been wary of the "conscription" of academic knowledge in the Human Terrain System, raising ethical, political, and intellectual concerns that most deem insurmountable. Particularly visible in the debate has been Field Manual 3-24's invocation of culture as a component of conflict and a necessary competency for intervention forces. The starting point of this conference is not FM 3-24's proposed solution, but its unusually forthright statement of the problem. In asymmetrical warfare with nonstate actors, the tools of the modern state are inadequate or counterproductive. Conflict takes place with imperfectly known actors on their own imperfectly known terrain. Their reliance on hybrid, localized tactics, unpredictable by standard models, leaves the dominant actor paradoxically vulnerable. The unfolding of the Iraq and especially the Afghan conflicts has opened the question of whether the intervening powers can reasonably expect to gain military, political, or even intellectual control of the situation. And their dependence on others – local authorities, civilians, and even insurgents -- in attempts to achieve any of these goals has become overwhelmingly clear. A workshop held at Cambridge University in July 2009 examined the attempts of militaries in the United States and United Kingdom to draw upon academic expertise in implementing the counterinsurgency strategy. Mars Turns to Minerva: The Military, Social Science, and War in the 21st Century, organized by Tarak Barkawi and Josef Ansorge, identified a rush to establish both epistemological and on-the-ground control through the revival of colonial policing methods enhanced with sophisticated technologies and typically less sophisticated adaptations of social-scientific frameworks. In this paired conference, we turn to the uses of uncertainty and informality, looking at interactions in the field through the eyes of NATO combatants, Provincial Reconstruction Teams, contractors, and diplomats; NGO workers; and, not least, Afghans themselves. We explore how all of these actors strive to make sense of one another and of an evolving situation. We consider how their modes of improvisation and their ambivalence over appropriate strategy redound upon the conflict itself, organizational and personal choices, and the larger context in which international relations take shape. We ask what can be learned from vernacular perspectives and methods that are not amenable to codification.

Streaming videos requires Windows Media Player to view.
The University Archives has determined that this item is of continuing value to OSU's history.