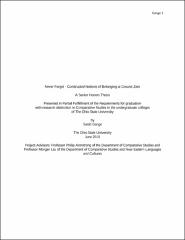 The aim of this paper is to contest the authority of physical space, or rather, the validity of using physical space as a parameter for identity. This argument looks at Ground Zero tourism in order to take an analytical approach to the effects of 9/11 through the lens of tourism, an activity that is generally assumed to be contingent upon movement through unfamiliar space, space that is not one’s home. In the past, tourism sites have been understood as a popular interpretation of which cultures inhabit which spaces, a part of which is an understanding of who ascribes to those cultures (non-tourists) and who views them (tourists). However, looking at 9/11 through the lens of tourism, makes it apparent that the spatial distinctions that generally identify tourists and non-tourists are insufficient criteria for distinguishing to whom the events of September 11th belong – where those cultural boundaries lie.