The American reaction to the 1968 Warsaw Pact invasion of Czechoslovakia 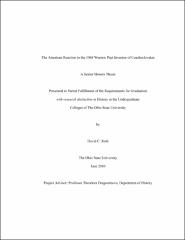 On the night of August 20, 1968, the armies of the Soviet Union, Poland, Hungary, East Germany, and Bulgaria invaded Czechoslovakia to suppress that country’s process of democratic liberalization later known as the Prague Spring. Although the world did take notice of this grievous breach of sovereignty, many countries, and in particular the United States, responded in a way that was perhaps underwhelming. Ever since the late 1940s, America had been actively promoting and supporting democracy and liberalization in Eastern Europe. However, the U.S. failed to continue that support during Czechoslovakia’s crisis. This dichotomy then—between America’s past actions, rhetoric, and implications of support, and the reality of its abandonment and disinterest in Czechoslovakia’s fate—requires further examination. The United States’ political response to the 1968 invasion of Czechoslovakia is therefore the primary focus of my research. However, there is also an examination of the broader social reply, particularly as to how it correlates to what elected officials were doing and saying. A majority of my sources are primary documents that came from institutions such as the Lyndon B. Johnson Presidential Library, U.S. Department of State, Central Intelligence Agency, and Library of Congress. In addition, my research has included newspaper articles and editorials, political cartoons, photographs, speeches, and the publications of social and cultural organizations. To comprehend why the United States responded as it did to the end of the Prague Spring, it is necessary to look at not only the personal and political goals of President Johnson, but also at the other pressing international and domestic issues of the time. Ultimately, by understanding the motives and reasoning behind the American response, it will be possible not only to better appreciate the framework within which the United States could act, but also the intricacies of American Cold War policy.