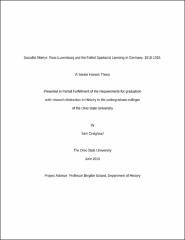 As the First World War was coming to an end, the German monarchy was collapsing. Various factions and members of the German Reichstag were scrambling to replace the recently abdicated Kaiser and restore some amount of order to the German state. In the following weeks, the Socialist Democratic Party (SPD) would gradually consolidate its grip on power and form a new government. Months later a general strike was declared in Berlin and hundreds of thousands of workers flooded the streets. Rosa Luxemburg and other prominent members of the Spartacists--far left defectors from the SPD--were initially opposed to the strike, but soon saw it as an opportunity to overthrow the SPD government. The Spartacists and like-minded radicals from the Independent Social Democratic Party (USPD) managed to assume control over the general strike, but could not agree upon its ultimate goal. Workers filled the streets, waiting for direction from the party leaders, but none came. Under the command of the SPD, Freikorps officers (demobilized, armed veterans of WWI) attacked strikers, killing hundreds and ultimately ending the uprising. Shortly afterwards, Spartacist leaders Karl Liebknecht and Rosa Luxemburg were captured, tortured and killed, their bodies abandoned in different parts of the city. Through examination of the writings and personal documents of Rosa Luxemburg, I have been attempting to discover what led her to participate in the uprising which ultimately led to her death. As part of my research, I visited the Hoover Institution at Stanford University to view their Rosa Luxemburg collection. The Institution's holdings include a substantial amount of Luxemburg's letters and other ephemera, which help to explain the political climate of the time and elucidate the meanings behind her actions in her last days.