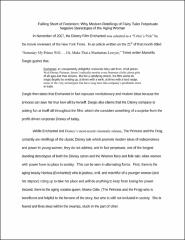 Modern retellings of fairy tales have been touted as being more feminist than the originals. However, those that are most available to consumers, particularly Disney films that are targeted towards young audiences, perpetuate the traditional stereotypes of the aging woman as a witch or evil crone. In addition to the perpetuation of the stereotypes already present in traditional tales, these modern retellings also bring in modern stereotypes such as the "cougar."