God, Gays, and the GOP: Understanding Issue 1 and the 2004 Presidential Election in Ohio 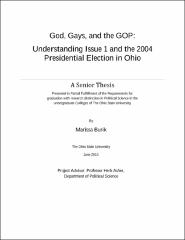 The 2004 Presidential election was controversial on many accounts. In order to be re-elected, President Bush tapped into the Evangelical Christian community using the issue of same-sex marriage. The Bush campaign accurately concluded that same-sex marriage was enough of a wedge issue to drive out conservative voters while dividing the base of the Democratic Party. In the battleground state of Ohio, this manifested itself as Issue 1, a Constitutional Amendment to define marriage as between a man and a woman. The purpose of this study is to understand how and why the Bush campaign was able to use the issue of same-sex marriage as a campaign issue, and to understand if it was an effective turnout technique. To do this, I will analyze the importance of the Evangelical Christian community to the Bush campaign and why it was important to have their support, and understand voter turnout. I will also look to the Kerry campaign's response to understand how the issue of same-sex marriage was used. This work is currently in progress. So far, research indicates that appealing to the Evangelical Christian community was a calculated effort by the Bush campaign to ensure a strong turnout from their voter base. It is also difficult to analytically determine if the issue had a significant impact on voter turn-out due to wide spread, well documented election irregularities. Ultimately, it may be difficult to determine if Issue 1 had a significant impact on the election results due to both other events, such as voter participation drives and voter suppression, and election irregularities. To better understand the issue, we will look to information gathered from the Ohio Secretary of State’s Office, as well as information from books, articles and interviews. Using the issue of same-sex marriage provided the Bush campaign with a wedge.